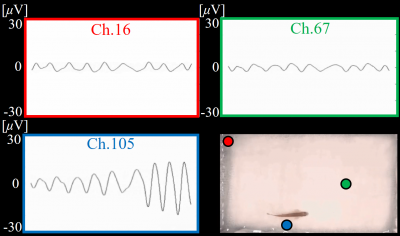 We proposed a system to analyze swimming behavior by measuring the ventilatory signals of fish under a free swimming condition from a 24-electrode array arranged on the bottom of an aquarium. The proposed system estimates the position and speed of the fish under noncontact/unconstrained conditions using the power spectrum distribution of the ventilatory signals measured from the electrodes. The measurement accuracy was examined by comparison video analysis results. It was confirmed that the estimation error of the position was 20.6 ± 6.3 mm, which is within the fish length range, and the estimated velocity was strongly correlated with that of the video analysis (r = 0.94, p < 0.001). Therefore, we concluded that the proposed system not only measures the ventilatory signals, but also has the same measurement accuracy as the video analysis. In addition, ethanol contamination experiments suggested that water pollution could be detected by combining fish ventilatory signals and behavior indices.

Back to Research topics