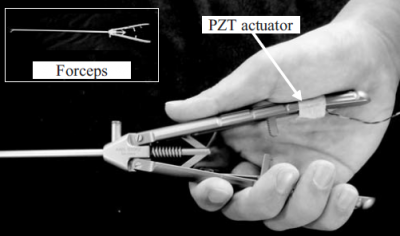 We proposed the concept of surgical grasping forceps with enhanced sensorimotor capability by attaching a vibrator to the forceps’ grip and evoking the SR effect. To apply appropriate vibrations, a network of FitzHugh–Nagumo neurons was built to investigate the system response when white noise was applied to each of four different tactile receptors. The relations among the tactile sensitivity, noise intensity, and amplitude of the input signal were examined through simulations with the neural network composed of different tactile receptors. The simulation results reveal that the working range of the SR effect can be extended by having multiple receptors with different characteristics in the skin. Based on the simulation results, we developed surgical forceps with sensorimotor-enhancing capability by taking advantage of the SR effect. We conducted touch testing, texture discrimination testing, and tumor detection testing to verify the improved tactile sensitivity. The experiments conducted with the proposed forceps show that maintaining the noise intensity within the optimal range could improve tactile sensitivity, and confirm the usefulness of the SR application for medical devices.

Back to Research topics